Across The Highest Saddles of the World on Enfields

Across The Highest Saddles of the World on Enfields
The second mostly densely populated state of the world- India and its capital- 12 million Dilli, is the beginning of our journey for 6 adventurers who met during 6 months working in the travel agency Rajbas.

It´s nearly impossible to get out of the city centre in the peak traffic on our heavy bikes without loosing each other. Firstly we were missing two of our friends for an hour and half but finally we managed to came together, find the way and continue to the north. Our borrowed Enfield bikes 500 cm are just fantastic and we love their the 50s design more and more. The first night after 100 km was a nightmare thanks to the thousands of mosquitos. But its´s our fault- everyone was too lazy to build a tent. We won´t risk another sleepless night and a malaria infection anymore.

The first part of our one-month long trip led us along China borders in the state of Himalčapradesh. The climate in the river Satluj Valley was nearly tropical which is great for a gross vegetation, eg. banana trees. One of the nights we spent in a 40°C hot springs (well, we´d apprecciate this a bit later). On the way between the valleys we could admire green rice fields on steep slopes. Nobody would grow anything on such places in our conditions but there are more than one milliard of Indians so that they use every piece of land. Sarahan village was our next stop. It´s a former rajah settlement with an amazing surrounding and one of the most exotic sights in north-west Himalayas, Bhimakálí temple. There are two high towers, beautiful slate roofs, shiny golden pinnacles and the top floor is for Goddess Bhima Kálí. She is covered in flowers and incences from the monks and she was veneratd for centuries by human sacrifices untill the 19th century.

We are riding along a carved out road against steep rock slopes to the town Recon Peo where it is necessary to obtain permission to cross the border of China. It takes officers all day, so we visit Kalpa village and an ancient Buddhist monastery, or gompa, in Tibet and Ladak. We wander around the once prosperous small alleyways in the centre, and see roads cluttered up from the monsoon season that has just ended. Twice we manage to get over a cave-in, but then we wait for hours for mud and debris to be cleared. Unfortunately the last 300m-long landslide won´t be cleared for years. Luckily the Indians are masters of lash-up and they´ve built a 500m long ropeway for food and firewood transport – and our 160kg bikes. We can´t use the ropeway for safety reasons, so we walk which causes a small delay. An interesting Tabo village welcomes us in the dark. 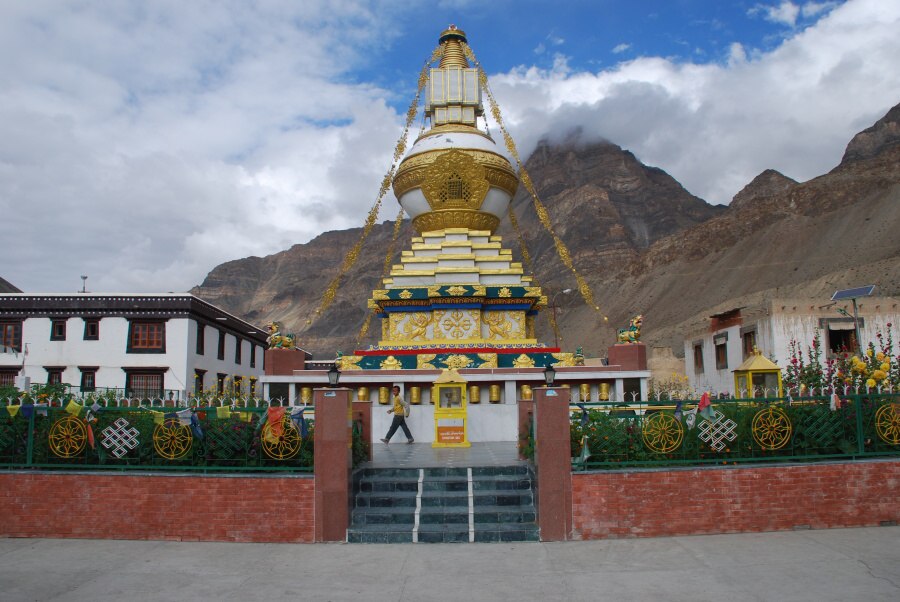 The next day we visit gompa. At the first, we see only wooden and clay boxes on the bank of the Spiti river, but soon realize this gompa hides the most remarkable Buddhist art treasures – multi-colored paintings with stucco relief. This monastery was established in 996 AD. The most remarkable masterpiece is Sughlhakhang, ”Hall of Illuminated Gods” with a beautifully decorated interior. We can´t wait to visit fantastic Ki Gompa, which has been built on a rock in the Spiti river valley, and spend the night in the highest electrified village in the world (4200m). The landscape of Tibetian houses surrounded by barley fields is spoiled by satellite aerials and too many travelers. The night is a great acclimatization before crossing a 5000m high pass. The next one hundred kilometers are the most impressive of the entire journey, and the moments and views stay in our memories forever.

The most dramatic part starts after passing Kunzum Pass at 4450m. The deep gravel road is sometimes crossed by unexpected torrents and we thank our bikes for making it without complications through this terrain. The famous road Manali – Leh was finished in 1989 and is now the most popular way to Ladak. It is open just a few months of the year due to snow. It leads from the Kullu Valley across the highest passes of the world (up to 5328m)! The road surface varies from smooth asphalt with deep holes to a dusty dirt road with glacial streams crossing it. The road zigzags through an amazing moonscape where we meet only herdsmen, dirty workers and gloomy soldiers. The 480km-long route takes us two days with one nighttime stopover in a tent for truck drivers. We want to try some local food, so we order a chicken coumen (noodles with chicken and vegetables). The chicken is a bit suspicious and looks more like marmot, goat or dog. They reply to our question with a smile: ”It´s a big chicken, sir”! Maybe it´s better to know nothing. That night is full of alcohol tasting, mainly with Sikh truck drivers, and they are impressed by our 60% strong applejack.

We then arrive in the problematic state of Jamu and Kashmir and an unaccessible region – Ladak, La-Dags, ”The land of Ghats”, sometimes called ”a small Tibet”. There are symbols of a one thousand year-old Buddhist religion all along the roads: colourful prayer flags, prayer mills in the villages, medieval monasteries and gompas at the tops of the rocks. The next day we visit some amazing places in the Valley of Indu, we see the gloomy prayer halls, ornamental sanctuaries, murals of fantasy Gods and massive bronze Buddhas. The centre of this region is a Leh town (3550m above sea level), and used to be an important stop on the Silk Road. Now it is a base for travelers from all over the world who want to explore local culture and nature. We set off for a five-day trip through the long valleys and 5000m high passes. We walk through little villages with tiny barley fields which are watered by ingenious canals. The life here is still the same as one hundred years ago. Suddenly we realize how difficult life is for these people and learn to live with just the necessities. By chance we become a part of a first birthday celebration. We can´t believe our eyes as we gaze at the beautifully decorated Tibetian women and their amazing dancing skills. It isn´t possible to refuse an invitation for chapati (barley griddlecake) and barley beer – chang, which is much stronger than we expect. Our travelling isn´t easy, it has now been three weeks on the road and there are only three of us now. By this time the others have given up because of some indigestion problems and altitude sickness.

After we return and get a little rest we set off in the direction of the plentiful glacial valley of the Nebra river. This time gompas and hot springs are not our target. It is the world´s highest driveable pass, Khardung La (5606m). We reach the top after about two hours of never ending switch backs and some military checks. This road has been open to the public only since 1994. Previously it wasn´t possible to get to the north of Leh. Today you can get there with special permission that is valid for 7 days.

Our traveling is nearly at the end. We only have 7 days to admire the beautiful lakes in Srinagar and then get to Dilli, which is about 1300km away. Everything is still so fascinating! There is Chos-Khor, 70km to the west, which is a spiritual island in Alchi, with ancient wall paintings and wooden sculptures. This place is believed to be one of the most important in Asian art history.

At the end of our adventure, we travel through a dangerous area between India and Pakistan. The conflict here culminated into war in 1999 and more than one thousand Indian and Pakistani soldiers died. That is why the road from Kargil is guarded by the military. The alpine part of the road going our direction is open from only 4 to 7 o´clock and is full of traffic. If you do not get up early, you have to maneuvre through hundreds of smelly trucks on the narrow roads. Three days and 450km later we get to Srinagar. We´ve decided to try an accommodation on a luxurious houseboat among water lilies. The owners care for us as if we are their best clients and not stinky bikers. We are valued guests because the war caused a total decline of tourism in this attractive area. Everything has to be very inexpensive. The following day we visit a floating vegetable market and a Mughalu garden and buy some souvenirs. We´d love to stay much longer in this magical place but the plane will not wait. We must ride the last 300km to Jammu and then take a train, with bikes in tow, 600km more to Dilli.

And that´s it! Our fascinating holiday ends. It is not easy to return our beloved Enfields. The last day in Dilli is devoted to shopping, taking pictures and sightseeing. We fly back home with a strong feeling that we must return one day. 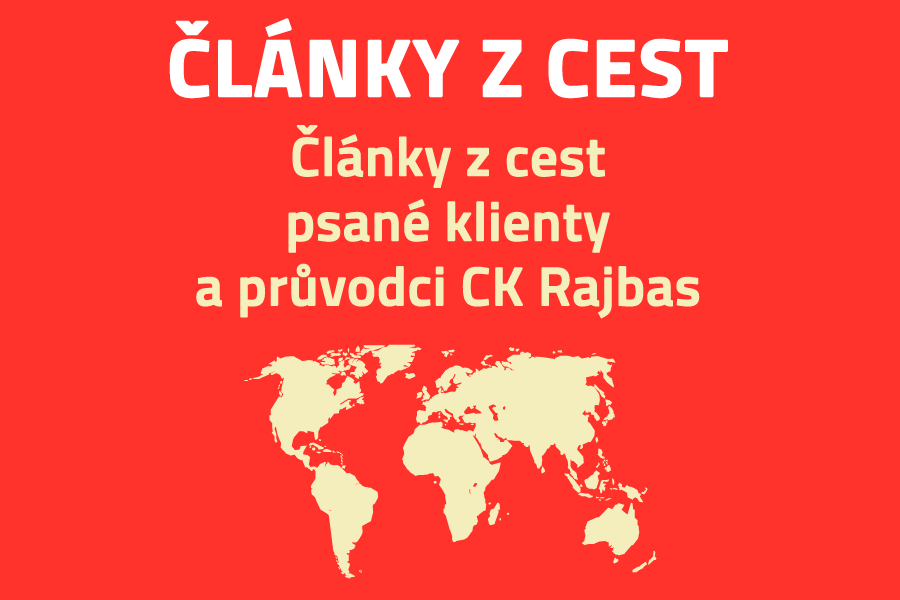 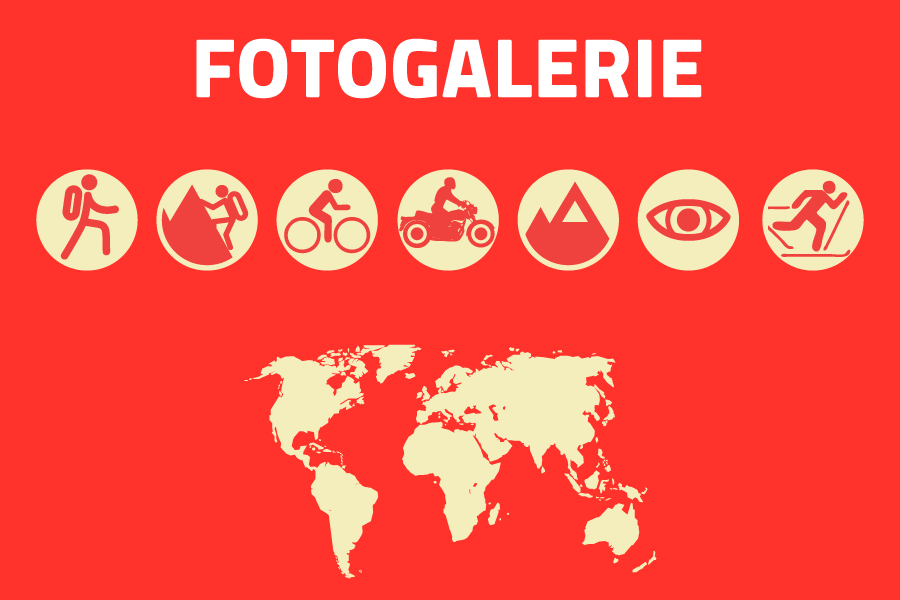 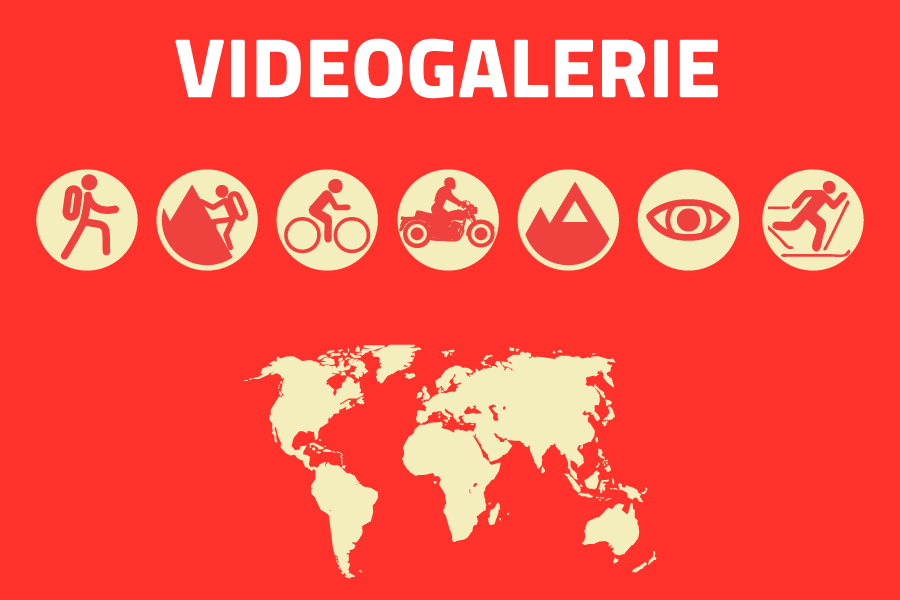